African Dust Storms in the Caribbean

There are five major worldwide pollutants in air. These are carbon monoxide, sulfur oxides, hydrocarbons, particulate matter and nitrogen oxide. Hydrocarbons and particulate matter account for more than 22% by weight of these pollutants. Epidemiological evidence indicates that when levels of ambient particulate matter and other pollutants (e.g., sulfur oxides) are significantly elevated acute detrimental health effects can be
quantified. Inhalation of contaminated particles can be associated with various respiratory illnesses, such as allergies, asthma, cardiovascular diseases, and in extreme cases to lung cancer. There is a high prevalence of respiratory illness in Puerto Rico. It is interesting to point out that in the Environmental Quality Summary (1980) produced by the Environmental Quality Board (EQB) of Puerto Rico it is reported that the municipality of Cataño exceeded and had a history of exceeding the National air quality standards. Interestingly, in one of its recent reports, the “Centro de Registro Central de Cancer” from the Public Health Department has shown that Cataño is the leading municipality in respiratory illness on the island. Some years back several articles appeared in the local newspapers expressing concern by residents of this area. Both the EQB and the EPA are joining forces to address problems in this area. They are developing an environmental control plan and initiating an in-depth study of the pollution problems.

African dust storms, also known as Saharan dust events, are responsible for
injecting large quantities of mineral dust into the atmosphere over the Atlantic
Ocean. As much as three billion metric tons of Saharan dust is transported across the Atlantic Ocean annually (Prospero et al., 1996). Generally, maximum transport to the Caribbean, Central and North America (latitudes 15-25 North) occurs during the months of June to October (Graham and Duce, 1979). We have also reported increases in PM10 and PM2.5 throughout the island of Puerto Rico during this period, particularly during the summer (Gioda et al., 2007). In the last decades an increase in dust flux across the Atlantic has been occurring, probably due to an increase in drought periods throughout Africa (Prospero, 1999) and probably associated to changes in the global distribution of sea surface temperature. These increases in mass transport across the ocean have been thought to be associated to environmental and health issues in the American Continent. The constant input of these small particles and their masses impact human health and ecological systems throughout the Atlantic. The seasonal influx of African dust coupled with local sources of ambient particulate matter (PM) could be a significant factor adding and modifying the air quality conditions in specific areas in Puerto Rico (PR).

A study performed by the School of Public health indicates that approximately 25% of children attending schools in the San Juan metropolitan area suffer of asthmatic illness. Thus far, no evidence is available, which relates suspended particles as the cause of these respiratory illness or which examines the possibility of respiratory toxicity by compounds adsorbed to atmospheric particles. The Center for Environmental & Toxicological Research is studying the health effects of airborne particulate matter from the area of Cataño and the possible contribution of African dust storms to these effects. 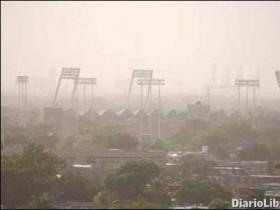